Photos From Stacey In Signy, Antarctica

Questions To A Scientist On Antarctica

Ella's grandad was an explorer and has a section of an Antarctic island named after him. Ella made an amazing PowerPoint about it to share with the class and her dad contacted a scientist/researcher called Stacey who is based there now. She sent over some photos, which are on the PowerPoint. Pelicans class came up with some questions and sent them over to Stacey so they could find out more!  Stacey has replied from her research station.

Which species of penguins do you see most often?

We have three species of penguin breeding at Signy: Chinstrap, Adélie and Gentoo, so we see a lot of all of those.  There are about 80,000 penguins in total here at Signy.  Sometimes king penguins and macaroni penguins can turn up too, but not very often, because they prefer slightly warmer weather.

Are any of them threatened by you- have you ever been attacked by a penguin and what type of penguin was it?

A lot of my job involves counting penguins.  This includes looking underneath them to see how many eggs or chicks they have.  This does not hurt them, and helps the scientists understand how well they are doing.  Over many years this tells us if the penguins are doing ok, or if they are becoming rarer.  All three types of penguin are quite fierce, and usually peck me or attack me with their flippers!  I think the Adélie penguins are the fiercest!

What do you eat and drink on a regular basis (we are doing some work on survival in the Polar Regions so they are interested in how explorers and researchers survive!)

As we are a small research station we cook our own food (the larger research stations have their own chef).  We have a big store room full of food so we can cook whatever we fancy.  We have big freezers and fridges, to keep things at a constant temperature, and then tinned and dried food too.  Every day someone is the cook for the day, and they start the day by making bread for everyone else.  Food is quite similar to at home, with cereals/toast for breakfast, sandwiches for lunch, and then whatever the cook decides to make for dinner.  Sometimes we make cakes and puddings too.

Is there any electricity? If you do have it, how do you get it? (We are reading 'Island' which is about a boy of their age going to a remote island so they couldn't believe people could survive without electricity!!)

Yes, we have electricity.  We have two generators that are about the size of the engines in a tractor.  They generate enough electricity to keep the research station running, providing us with lighting, heating and electricity.  We also have solar panels, which provide us with energy too if it is sunny.

What would happen if you brought fresh fruit and vegetables?  Would it freeze?

Inside the research station it is warm and dry.  We bring fresh fruit and vegetables down with us, delivered by ship.  It is a long way to Antarctica so often they have been on the ship for nearly a month before we get them.  Things like potatoes, onions and carrots will last many months though, as will apples and oranges.  We do not get things like bananas, grapes and salad because they would go rotten before they got here.  If food was left outside, yes it would freeze and be ruined.

What wildlife lives in the waters surrounding Signy?

Lots of different seals live in the sea around Signy; Elephant seals, Antarctic fur seals, Weddell seals and Leopard seals.  There are also whales, but we don’t see them very often.  Probably the most important thing that lives around Signy is the Antarctic krill, which look like shrimps/prawns.  They are important because they are what the penguins and seals like to eat best.  Fish are also important for the same reason.

What do you do in your spare time to keep yourself occupied?

It is very busy here so I don’t get much free time.  If I do get some time to spare I like to take photographs.  I am also trying to learn to play the guitar.  Sometimes I make cakes.  Some nights we will play a game (like cards or darts or a board game), or I read books.  We do not have live TV but we have lots of movies that we can watch.

Are the living conditions cramped? What are they like?

The research station is quite spacious with all the things you might find in a normal house- kitchen, living room, bathroom and bedrooms.  Then there are labs and offices too, and in separate buildings there are generators, fuel and food stores.  The bedrooms are tiny, and we have bunk beds, so two people per room, but there is plenty of space otherwise. There is space for 8 people at Signy at once.

What other species of animals live there apart from penguins?

Besides the penguins, there are lots of seals that spend some of their time on the island and some of it in the sea.  These are mainly Elephant seals and Antarctic fur seals.  There are also a few other birds that live here, including several types of Petrels (which are like little albatrosses).  There are also tiny creatures, mites and springtails, and even smaller creatures that you need a microscope to see- they all live in the soil and moss which covers some areas of the island. 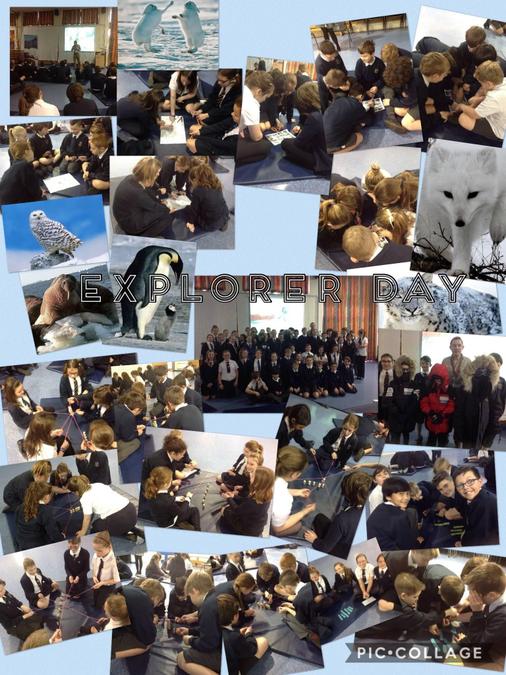 This is "Pelicans End of Term Mannequin Challenge" by Christian Hilton on Vimeo, the home for high quality videos and the people who love them.

All our Year 6 pupils are prefects, with important jobs in school such as ICT agents, office prefects, playground leaders and rabbit monitors.  We want them to be role models for the rest of the children in school, but not just at school, but around the town too.

PCSO David Martin, Youth Engagement Officer from Warwickshire Police spent the morning in Flamingos and Pelicans classrooms, teaching topics such as social media and phone safety, cyberbullying and that being unable to see people's reactions to comments and text messages face to face means you have to think carefully before pressing the send button.

As part of our work on British Values, the children were also spoken to about following the rule of law and how children between 10 and 17 can be arrested and taken to court if they commit a crime.  The children were very engaged and listened well to these very important messages about online safety, behaviour and being a good citizen.

This video is about Manor Adventure 2016 Day 1

This video is about Manor Adventure 2016 Day 2

Year 3 used iMovie to apply their knowledge and understanding of persuasive language to make adverts for their pizza restaurants.